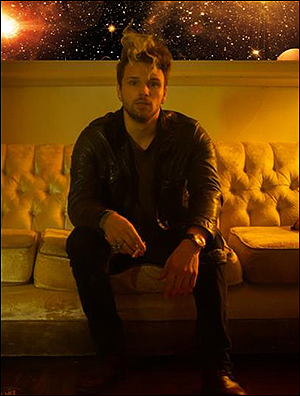 (CelebrityAccess) – Joel Crouse — the Nashville-based singer, songwriter and guitarist– has partnered with AXS.com to premiere the lyric video for debut single "Paranoid." The video for the single visually captures the modern anxiety and chaos in the world as represented in the haunting alt-rock song's lyrics: "They want us to lay down, bow our heads and close our eyes without a fight/We'd rather die" and "We're not confused, we're paranoid."

The song, released July 17,was performed live this past month when the band–including Davis Naish (keyboard/backing vocals) and Dre Williams (drums) alongside Joel Crouse–made their debut in Los Angeles at the packed Hotel Café, with Hits Daily Double on hand noting "… Joel Crouse performed a rock-solid set featuring his latest single 'Paranoid'…" (9/22).

Joel Crouse performed last week in Nashville, TN at The Basement East as part of Lightning 100's "Thunderground" series with Ed Sheeran in attendance. The station currently has "Paranoid"–co-written by Joel Crouse with Todd Clark and produced by Davis Naish and Joel Crouse –in rotation.

Joel Crouse is the moniker of the 25-year-old Joel Crouse, who's returned to his rock roots with a sound that's free of genre walls after releasing a 2014 country album and opening on the road for Taylor Swift (her "Red" tour) and Darius Rucker. "Paranoid" was co-written by Joel Crouse with Todd Clark, produced by Davis Naish and Joel Crouse, and recorded in Nashville. "Paranoid" was written in July 2016. "I'm sure most would agree that it had been a very interesting year up to that point," says Joel Crouse about the polarizing political divisions, internet lies, and the general feeling of anger and confusion people were experiencing-and still are. The song also has a personal connection for Joel Crouse, particularly with the line: "They want us to lay down, bow our heads and close our eyes without a fight." He says: "I grew up in a safe and sheltered church environment. My father who is a pastor used to say '…bow our heads and close our eyes' before ending his sermons. I guess I was being sarcastic with that line in referring to being sheep to what we are told to think."

What inspired Joel Crouse to return to his rock roots? "I love a lot of music—the first band I was in was very Beatles-influenced (back in his home state of Massachusetts). But then we broke up and everyone went to college while I moved to Nashville. Then fast forward six years later, at 23 I reconnected with Fletcher Foster (manager and head of Iconic Entertainment), and he was the first person I had worked with to let me go back to those roots of the music I loved: The Beatles, Pink Floyd. Nirvana, Audioslave. That's where my heart is. As for the name change, I wanted a clean slate but still carry the fans that have supported me."