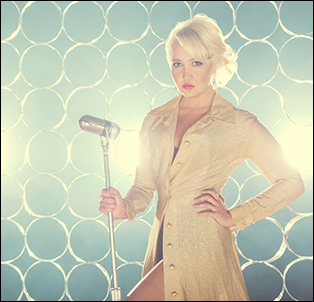 Meghan, who began her career as one half of acclaimed country duo Steel Magnolia, just a few weeks ago wrapped up season 8 of NBC's hit singing competition "The Voice." She debuted her original single "Change My Mind" (which sold more than 50,000 downloads in its first week) on May 18, 2015 during part one of the show's finale. Watch her powerful and chill-inducing performance here; an official music video for "Change My Mind" was also unveiled that night on "The Voice's" YouTube page here.

Q: You've always showcased elements of soul in your voice when you sing. What inspired you to move more in that direction on this new EP which brings pop and soul to the forefront?

A: "Recording this time around was really just about finding my voice as a solo artist, and for me, that meant getting back to my roots. I grew up in New Orleans and I've always had a soulful sound, I'm just now really able to showcase it fully. Tyler Cain produced the record and we did a lot of it with just the two of us and a total of 3 musicians. I think keeping it small was key. His production really allows me to showcase my soulful side while keeping it mainstream."

Q: "Counterfeit" is an interestingly unique title, what sparked the writing of it?

A: "I wrote this song with Tyler Cain and Julie Moriva. We really set out to write a strong, female anthem. It's about being "Authentic" and real. I feel like I'm coming into my own and embracing my Womanhood lately. It's fun to sing sassy songs with meaning."

Q: What can your fans expect to discover about you after listening to this collection of new music?

A: "These six songs are a great representation of me, as a human and an artist. They're bold and genuine and have depth. I really laid it all out there."

Q: What was your mindset when writing these songs?

A: "I wanted to write about what I know and what I've been through. I haven't always been confident. I'm still not always confident. I struggle with feeling balanced and good enough, all the time. I've been through some hard stuff and I've come out on the other side and I'm ok. I'm stronger than ever. I think people can relate to that. I want to be an inspiration to others."

LINSEY recently performed at the 35th annual "A Capital Fourth," which aired live on PBS the fourth of July and took place on the West Lawn of the U.S. Capitol in Washington, D.C., also featuring performances from Barry Manilow, Alabama, Nicole Scherzinger, Hunter Hayes and more.