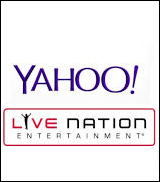 LOS ANGELES (CelebrityAccess) — Yahoo and Live Nation spent the past year live-streaming a concert every day and after the first year drew to a close on July 14th, the numbers are in.

According to Billboard, the concerts logged 135 million live streams from 225 global markets, with an audience demographic that skewed heavily millennial, with each viewer spending an average of 24 minutes watching the stream. That works out to approximately 369,000 viewers per concert.

Yahoo! and Live Nation will be continuing the program for 2015/16, but instead of streaming a concert per day, they plan to throttle back to several per week, Billboard said.

“We looked at the math and saw that we could actually increase streams and avoid traffic jams for a big Lady Gaga concert if we had a day or two before and after the show,” Lisa Licht, Yahoo’s senior vp marketing partnerships told Billboard.

The second year of the program started on July 15th with a concert by Christina Perri, with artists including Train, Graham Nash and Miguel on deck.

Citi, Kellogg and Sprint participated as sponsored for the first year of Yahoo Live, with $5 million to $7 million each, but second-year sponsorship deals were still being negotiated at the time of the program’s renewal, Billboard said. Yahoo declined to comment on artist negotiations, but an unnamed source told Billboard that compensation varies, with Live Nation and Yahoo! taking a share of the ad revenue from the streams.