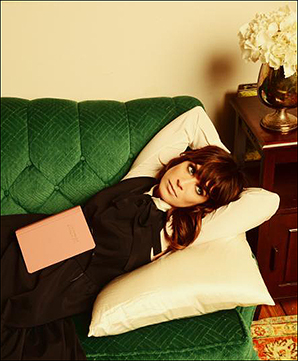 (CelebrityAccess) – Nicole Atkins announces the release of her fourth studio album, Goodnight Rhonda Lee, out July 21st on Single Lock Records, with an NPR premiere of the soul-drenched song, "Listen Up," via a hilarious video directed by Tim Duggan.

"I wrote 'Listen Up' as a note to self," Atkins told NPR. "To stop beating myself up over bad self talk and fear and listen to the good advice of others. I gave it a soul meets Fraggle Rock treatment because that's the sound of what's real and positive to me. It's basically, 'Don't be your worst enemy. Surround yourself with good people and let them help you.

I came up with the concept of the video after a string of unfortunate events. After a gig I fell into a sinkhole in a parking lot in Knoxville. I got pretty hurt, but it could've been a lot worse. I was trying to find the humor in it so I came up with the idea of me being the star of a bunch of Fail videos ala 'America's Funniest Home Videos.' You really gotta look where you're going sometimes."

Atkins has been celebrating Goodnight Rhonda Lee and her new relationship with Single Lock Records with a wide-ranging run of live dates including a series of showcase performances at Austin, TX's South By Southwest (SXSW) and just-completed May run supporting Old 97's. The touring will continue with a festival performance at Hunter Mountain, NY's Mountain Jam on June 17th as well as an appearance at this year's Newport Folk Festival.