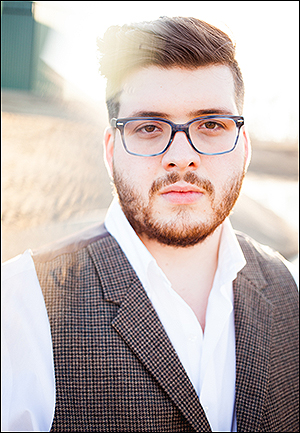 CelebrityAccess (Nashville, TN) – Just seven years ago, Noah Guthrie was a high school junior, posting cover songs on YouTube from the bedroom of his South Carolina home. Now, the former GLEE star and social media phenom is about to release his sophomore album of original material, The Valley, June 23, 2017 on his own independent label through Sony RED and available digitally for pre-order (iTunes, Amazon, Google) on May 12, 2017. Two singles, “Love You Now” – which came out for Valentine’s Day on February 10th and “Pardon Me,” (released in June 2016) precede the full-length, follow-up to his August 2013 debut, Among the Wildest Things.
Guthrie’s upcoming single is a fully-produced band version of Prince’s “I Would Die 4 U,” a bonus track on the new album (complete with strings,) that is slated to come out April 14, marking the one-year anniversary of the superstar’s passing.
“I’ve just always loved that song, even before he died,” says Noah, who switches to keyboards for the song. “I felt like I could slow it down and make it more of a ballad. The lyrics are very intimate, even though the original has a dance mix. I really like the way it turned out.”

Guthrie recorded his upcoming album, The Valley, with his older brother Ian, who doubles as co-producer, engineer and drummer, “whatever I need him to do,” says Noah. He also used two of the musicians in his touring band – bassist Phillip Conrad and guitarist Rhett Shull – as well as keyboardist Rhett Huffman. Guthrie is set to hit the road in April for a European tour in Germany, Switzerland and Netherlands, where he has developed an impressive following.
Guthrie’s upcoming album The Valley encompasses all of Noah’s many influences, from the loping country flavor of “Love You Now” to the heartland rock of “Razor Blade,” the gentle folk of “’Til It Thunders” and the Beatlesque closer, “Mary.” His supple vocals can handle a variety of genres. Guthrie describes the theme to the album’s title track – co-written with singer/songwriter Amy Stroup — about “working through tough times in a relationship or a creative situation… pushing myself to get over the hump.”

“I’ve grown a great deal as an artist and the music grew with me,” explains Noah about the new record. “These songs are more mature and personal than anything else I’ve ever written. They are from my heart. I really want to show fans my original songs are where I live.”

Building his following from the bottom up in the brave new digital world with old-school grass roots diligence, Guthrie has amassed a following that includes more than 74 million views on YouTube with 484k subscribers to his channel; 425k+ likes on Facebook and almost 550k monthly Spotify listeners. Guthrie has posted five compilations of covers on Spotify that include versions of songs by Taylor Swift (“We Are Never Ever Getting Back Together,” with 3.3 million streams), Adele (“Set Fire to the Rain,” with 8.3 million streams) and Mumford & Sons (“Little Lion Man” and “Timshel”.)
In addition, Guthrie’s largely viewed, slowed-down, bluesy take on LMFAO’s “Sexy and I Know It,” has been viewed more than 25 million times on YouTube and streamed another 1.5 million times on Spotify.

“I have no idea what the secret is to going viral,” says the soft-spoken, admittedly shy Guthrie about the track. “I wish I had a straightforward answer, because I’d apply it all the time. That was one of the easiest covers I’ve ever done. I did it in a single take. I posted, when to bed, and by the time I awakened, it was blowing up.”

Noah Guthrie’s online success helped him secure the pivotal role of Roderick Meeks on the sixth and final season of GLEE, where he earned raves for his performances of Hozier’s “Take Me to Church,” Mark Ronson/Bruno Mars’ “Uptown Funk,” George Michael’s “Father Figure” and Wilson Pickett’s “Mustang Sally,” showing off a classic voice capable of going from a whisper to a scream, that is equal parts Sam Cooke, Rod Stewart and Jerry Garcia. One of the 15 people who attended a house party where Noah was performing told Alex Newman, the casting director for the show, about him after learning she was looking for “a chubby, kind of shy guy with the voice of Otis Redding.”

“There was a lot of me in that role,” said Noah. “The writers did a good job of tapering the part to my personality. I was that overweight kid in high school who got picked on, but once I started singing in public, things got a lot easier for me… just like in the show.”

From a self-admitted withdrawn, introverted adolescent, Noah Guthrie has grown smoothly into his internet notoriety, with a loyal fan base that helped him self-finance the recording of his debut through Indiegogo.com and raise money for promotion, marketing and publicity for The Valley on PledgeMusic.

“The crazy thing about today’s music business is you can literally go from your bedroom to anywhere in the world. I treat my fans with respect, and let them know how thankful I am to have them. I try to be as real as I can. I always want to verbalize how much I love them, because without them, I couldn’t do what I do.”