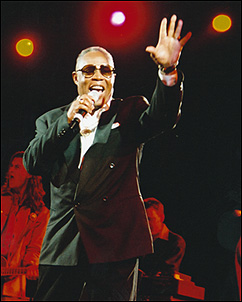 New York, NY (CelebrityAccess August 13, 2014) – For years Sam Moore was best known for lending his unmistakable lead vocals to the historic soul duo Sam & Dave that hailed from Miami, Florida, but found their fame tied to the Memphis based Stax Records. The rapid fire call and response fashioned by Sam from his gospel roots became the trademark style of the duo and can be heard in the vocals of hits including "Hold On, I'm Comin'," "I Thank You," "When Something Is Wrong With My Baby," and of course the song legends are made of "Soul Man". Now in 2014, Sam returned to Memphis, Tennessee to interview with CBS Sunday Morning’s Anthony Mason.

Moore's latest solo recording of "They Killed A King" is to honor Dr. Martin Luther King Jr.'s memory and remind us all of his important message. Sam knew and traveled with Dr. King, performing with duo partner Dave at many of Dr. King's speeches and rallies in both the north and south. "Sam and Dave" actually served as an opening act, setting the crowds up for Dr. King to take the pulpit or stage and preach his message during the Civil Rights Movement in the 1960's.

The Grammy award winning, Rock & Roll Hall of Fame member is no stranger to collaborations, having recorded "Rainy Night In Georgia," as a duet with Conway Twitty, which earned them a platinum record as well as two Country Music Association Award® nominations. His last solo recording project Overnight Sensational, produced by Randy Jackson, included collaborations with friends and fans like Bruce Springsteen, Jon Bon Jovi, Sting, Vince Gill, Travis Tritt, Paul Rodgers, Eric Clapton, Billy Preston, Billy Gibbons, and Wynonna. In Moore’s latest recording, he teams with bluegrass group Nu-Blu to record a duet on “Jesus and Jones,” a song paying tribute to the iconic George Jones. This is the first time Moore, or any artist with a legacy similar to his has crossed genres to record a bluegrass song.

Sam Moore has received the coveted NARAS Heroes Award, been inducted into the GRAMMY Hall of Fame for "Soul Man," earned the ETAM Living Legend Award and received a Pioneer Award from the Rhythm & Blues Foundation and is one of few recording artists alive who has performed for all five (5) living Presidents of the United States. Rolling Stone magazine named Sam Moore among the Top 100 Greatest Singers of All Time.