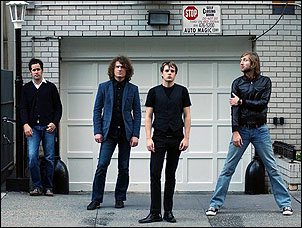 NEW YORK (AP) — The Killers' lead singer looks like he stepped out of a 1980s time warp with the eyeliner, the pressed suit and tie and the lipstick, er, lip gloss.

Even the band's debut album, Hot Fuss, is a bit of a throwback, combining 1980s pop sensibilities with today's rock sound. And that's just the way the band intends it, says frontman Brandon Flowers.

"We see ourselves in the same vein as a lot of bands out there right now. But our goal . . . right out of the chute, was to take it to a different level," he says. "I'm not saying we're going to do it. But that's what we've set out to do."

It's an effort that appears to have helped propel the band up the charts and garnered the quintet three Grammy nominations, including one for rock album and rock song for their danceable hit Somebody Told Me.

Formed in 2002, the Killers took its name from the New Order video Crystal, which featured a fake band named the Killers – a supposedly perfect band with a great song, good looks and youth on its side. Turns out, it may be a case of reality following in the footsteps of art with the Las Vegas quintet of Flowers, guitarist David Keuning, bassist Mark Stoermer and drummer Ronnie Vannucci.

A year later, the band had a deal with an independent English label and was touring nonstop. Within months, the Killers caught the attention of major labels, eventually signing with the Island Def Jam Music Group.

Since then, Flowers' face has been splashed across magazines and the band has appeared on NBC's Tonight show and Fox's The O.C.

But Flowers, 23, seems to be taking it in stride, careful not to take anything for granted in an unpredictable business. He answered the following questions in a recent interview:

AP: You've only really been at it together a few years. Are you surprised by the quick success?

AP: You said earlier the Killers wanted to take it to a different level?

Flowers: Joy Division was a great band. But U2 and the Cure took that to another level and made it not only radio friendly but they kept their dignity intact. We want to be one of those bands that people are into but also has written some great songs. And radio is changing. The Strokes and the White Stripes have all done a very good job. But they haven't broken the doors open.

AP: Isn't that a tall order for a band?

Flowers: Yeah. Radio is changing and it's by no means just because of us. It's us and Franz Ferdinand and the Yeah Yeah Yeahs and a lot of other great bands. We're just happy to be part of the change that's happening.

AP: So what inspired Somebody Told Me?

Flowers: I love the play on words. I think of it as a great icebreaker. I think of it as the ultimate pickup line. If I was a girl I would think that it's very clever, if a boy came up to me and said that to me.

AP: Have you used that line?

Flowers: No. But I hope somebody does. I think the girl would melt?

AP: Or freak out?

Flowers: No, not freak out. It would be funny, and it would be a great way to break the ice. Oh, I don't know. It's our most lighthearted, most Las Vegas song. It's good, clean fun.

AP: Yet your band doesn't really give off that Las Vegas feel.

Flowers: A lot of people think we do and I don't get it. But then a lot of people also think we just rip off English bands. We just try to be us and write our songs.

AP: At some point, the band had to make a decision about its musical approach, right?

Flowers: Well, sort of. These are the songs that we did. We didn't really throw anything away because it didn't sound like us. We haven't had anything like that. We love different kinds of music, so our album is pretty diverse.

AP: Where do you go from here? What do you do next?

Flowers: You got me in a really good mood. I'm just happy with everything right now and I have a lot of confidence in our songs.

AP: I have to ask is it: the success – everything you thought it would be?

Flowers: Yes, and more. There's so much that you never think about when you're trying to get your music out there. You know, like doing interviews at 11 o'clock at night on a cellphone standing on the street in Cologne, Germany.

For more detailed contact information, for this artist and many other celebrities (as well as comprehensive tools to help you do your job), contact https://www.celebrityaccess.com for a free seven-day trial.