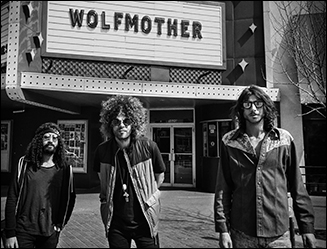 LOS ANGELES, (CelebrityAccess) — On the heels of their own headlining tour, Grammy Award-winning rock band Wolfmother have been tapped to support Guns N' Roses for several dates on their historic North American 'Not In This Lifetime' stadium tour as it hits the road this summer.

As well, the group has added dates to their current headlining Gypsy Caravan Tour, which kicked off for North American dates in February before heading overseas. The band returns to the U.S. in support of their latest studio album, Victorious, on Universal Music.

Victorius, recorded at Henson Studios in Los Angeles with two-time Grammy-winning producer Brendan O'Brien (Pearl Jam, AC/DC, Chris Cornell, Bruce Springsteen) has been well-received by the critics. The album, which sees the band continue to draw on their vintage rock influences fused with a post-modernist ethic, with cuts ranging from ballads to arena rock monsters.

About working with O’Brien, Stockdale says, “I did the last record by myself, so it was good to get back to working with a producer who could help with arrangements and have a responsibility to maintain the sound. Brendan’s a very musical producer, and he had a great understanding of the songs.”

The group, which has seen some lineup changes, features Andrew Stockdale on vocals, guitar, and base, as well as Josh Freese (Nine Inch Nails, Bruce Springsteen, A Perfect Circle) and Joey Waronker (Air, Beck, REM) to split drum duties.

In addition to their studio work, the band has been aggressively touring as they seek to develop a supportive live fan base, playing major fests such as Coachella, Lollapalooza, Bonnaroo, Isle of Wight, Rock am Ring and Reading and Leeds.

When Led Zeppelin was inducted into the Rock & Roll Hall of Fame, they personally invited Wolfmother as their guests (the band showed their appreciation by delivering a cover of Zep's "Communication Breakdown"). – Staff Writers