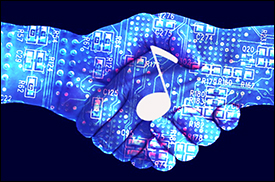 (Hypebot) – 2017 is the year that Blockchain will become more of a tool than a theory. The technology, which allows seamless tracking of digital use has been called the savior of an industry where tractions yield only a fraction of a penny. Now, three of the world's biggest collection societies have joined together to advance the technology.

Performing rights organizations ASCAP, SACEM and PRS for Music have announced a partnership to prototype a new shared system of managing authoritative music copyright information using blockchain technology. The goal of the project is to prototype how the music industry could create and adopt a shared, decentralized database of musical work metadata with real-time update and tracking capabilities.

BLOCKCHAIN – a distributed database that maintains a continuously growing list of ordered records called blocks. Each block contains a timestamp and a link to a previous block. – Wikepedia

The societies are working together to model a new system for managing the links between music recordings International Standard Recording Codes (ISRCs) and music work International Standard Work Codes (ISWCs). Establishing robust links between these two pieces of data offers a practical solution with enormous potential for improving the processes of royalty matching, which will in turn speed up licensing, reduce errors and reduce costs.

Under the initiative, data and technology teams from SACEM, ASCAP and PRS for Music are working with IBM, leveraging the open source blockchain technology from the Linux Foundation, Hyperledger Fabric, to match, aggregate and qualify existing links between ISRCs and ISWCs in order to confirm correct ownership information and conflicts. While still at an early stage, the project is proving to be an exciting reference point for future industry blockchain solutions.

Blockchain has become well-known for its use in payments systems for its ability to manage records without centralized governance – a characteristic that will be harnessed in this project to resolve conflicts between conflicting identifiers for the same work across multiple rights holders.