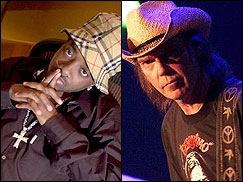 The American Society of Composers, Authors and Publishers (ASCAP) will present Jermaine "JD" Dupri with the ASCAP Golden Note Award during the 22nd Annual ASCAP Pop Music Awards gala. The invitation-only awards dinner will take place on May 16 at the Beverly Hilton Hotel in Los Angeles, CA. The event will also honor the songwriters and publishers of ASCAP's most performed songs of 2004.

We are so pleased to honor the multi-talented Jermaine Dupri with ASCAP's Golden Note Award this year," said ASCAP President and Chairman Marilyn Bergman. "Jermaine will join a very elite group of our Golden Note-winning songwriters and we are proud to add his name to this list."

Grammy and ASCAP Rhythm & Soul Songwriter of the Year winner, Dupri has also earned platinum status for his own work as a rapper. He has released a number of top hits, such as "The Party Continues," "Money Ain't A Thang," "Sweetheart," "Ballin' Out Of Control," and "Welcome To Atlanta." Most recently his work on Usher's multi-platinum album, Confessions, garnered Jermaine four 2005 Grammy nominations for his songwriting and production work on chart-toppers, "Confessions-Part II," "Burn" and "My Boo."

Neil Young will also be receiving top honors at the Pop Music Awards gala in May. He will be presented with the ASCAP Founders Award, which is one of the most distinguished honors that the Society bestows, paying tribute to pioneering songwriters who have made exceptional contributions to music. Young joins Burt Bacharach & Hal David, Garth Brooks, Elvis Costello, Quincy Jones, Jerry Leiber & Mike Stoller, Paul McCartney, Joni Mitchell, Steely Dan, James Taylor, Tom Waits, and Stevie Wonder, to name a few who been previously honored.

The 2005 Pop Music Awards will also honor the songwriters and publishers of ASCAP's most performed songs of 2004. Special awards will be given to "Songwriter of the Year," "Song of the Year," 'Publisher of the Year" in addition to the presentation of the "College Vanguard Award," which recognizes the impact of new and developing musical genres that help shape the future of American music and which gain early popularity on college radio. –Bob Grossweiner and Jane Cohen