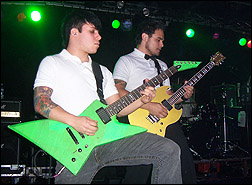 BURBANK, Calif. (CelebrityAccess MediaWire) — Atreyu has signed an exclusive worldwide recording agreement with Hollywood Records. They recently released their final Victory Records album, "A Death-Grip on Yesterday" which has already scanned 210,000 albums. "A Death-Grip on Yesterday" features the singles "Ex's and Oh's" and "The Theft", and is the band's most adventurous musical entree to date. The Orange County quintet burst on the scene in 2002 with their "Suicide Notes and Butterfly Kisses" to rave reviews and sold out concerts, and followed up in 2004 with their second album "The Curse. Atreyu were headliners on Ozzfest this summer, and will embark on their own headline tour October 6 (see dates below). Atreyu are no strangers to the road. They headlined the Vans Warped Tour in 2005, and their last "Thick As Thieves" headline tour in 2005 sold out venues worldwide, including the US, Europe, Japan and Australia.

Atreyu lead singer Alex Varkatzas commented, "As a group of friends playing music our main goal is to grow and spread our brand of metallic rock around the world. We try to progress and grow on each album we record. We feel that Hollywood Records is the perfect place to continue to grow, while maintaining our freedom to do whatever the hell we want with our songs. We look forward to our future with Hollywood, they have shown a real interest in us for quite a while. To put it simply, they are down for us and we are down for them. C ya in the pit."

Added Bob Cavallo, Buena Vista Music Group Chairman, "Atreyu have a special presence and powerfully intense live performance. They are fearless in their approach to music and I'm delighted to have them signed to Hollywood Records. This is a big priority for us."

Hollywood Records is quickly becoming home to a slew of major rock acts. This January, Hollywood announced the signing of former Geffen Records group Sparta, whose new album will be out October 24. The label is also home to platinum selling Breaking Benjamin whose new album, "Phobia," debuted at # 2 on the Billboard Top 200 Album chart. Next up are Evans Blue, with their #1 Heatseekers debut "The Melody and the Energetic Nature of Volume." Hollywood is also home to buzz band Plain White T's, and the long time US distributor of Queen's catalog. Queen + Paul Rodgers recently had a sold out US tour. – CelebrityAccess Staff Writers.

Atreyu's tour dates are as follows: