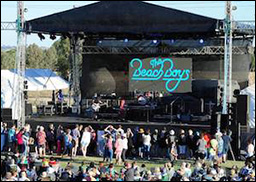 Lower-than-expected ticket sales and the storm which forced The Beach Boys to postpone their show at the Wagga Equex Centre are being blamed for the failure of the tour to make money.

The Beach Boys and The Temptations were due to perform on the same night, but rain forced the Surfin’ USA singers to postpone their performance, which was held two nights later.

An estimated 3000 people were said to have attended the second concert, 500 more than at the first show.

Documents filed with the Australian Securities and Investment Commission show the Southern Stars Touring company had debts of $700,000 and assets of just $14,000 when it was placed in liquidation in Queensland.

According to these documents, Southern Stars Touring owes Wagga Community Media, which operates radio station 2AAA, a total of $5772, while broadcasters Austereo are owned $15,686.

Mr Sims said he had been in touch with the event promoter and director of Southern Stars Touring, Steve Scerri, about his accounts and had been able to negotiate a part-payment, leaving $1375 outstanding.

“They needed more ticket sales. They only did about six shows,” he said. “It’s a shame, but this stuff happens. Touring is an expensive business.”

Speaking just after the initial creditors meeting was held in Brisbane yesterday, Mr Scerri told The Daily Advertiser: “I don’t really have a comment.”

A spokeswoman for liquidators David Clout & Associates said the process could take six to 12 months.