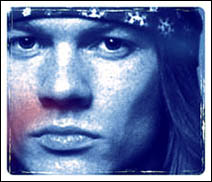 (Hypebot) – Not sure how broken copyright and the systems uses to police it are? Axl Rose has hired Web Sheriff to demand that sites across the web take down an unflattering photo of the then very overweight singer. There are two problems with this strategy. Rose does not own the photo and the effort to squash it has generated even more views of the offending photo.

By Mike Masnick Of Techdirt

Show of hands: who remembers Axl Rose? Last we here at Techdirt checked in on him, Rose was busy suing video games and hassling music bloggers over album leaks. The younger among you may chiefly be familiar with his Axl-ness via a somewhat popular string of internet memes centered on some rather unflattering pictures of the musician taken from a concert in 2010.

There are, like, tons of these. And, as you can surely understand, Rose isn't pleased that these memes are going around. Hell, we all have photos taken of us that we probably don't find flattering, and Father Time ends up foisting pounds and wrinkles on all of us that we'd rather not have. What most of us don't do, however, is cook up a copyright claim on a photograph we didn't take and try to get Google to remove every use of the picture from the internet. Rose has done that. And you'll never guess who he employed to help him do so!

“Copyright image of Axl Rose. Please be advised that no permission has been granted to publish the copyright image so we cannot direct you to an authorized example of it,” the notices sent by Web Sheriff on behalf of the singer read.

Hi there, Web Sheriff! In between money-laundering, abusing human rights, and generally breaking roughly all the laws over here at Techdirt, we had just enough time to notice you have a strange view on how copyright law works! This comes as only a mild shock to us, given how confused you folks appear to be on all the other laws you routinely talk about, but let's give this a go, shall we?

The DMCA notices all revolve around photos taken in 2010 at a concert. Those photos were taken by Boris Minkevich and published by the Winnipeg Free Press.

TorrentFreak tracked down the photographer who captured this moment to see if he was aware of these takedown efforts. We eventually found Boris Minkevich at the Winnipeg Free Press where his fine work is published in all its glory. During our initial discussions a few things became clear. Firstly, Minkevich definitely took the photo. Second, Minkevich had no idea that Rose was trying to “cleanse the web” of his photo. Perhaps the first reaction here is that Rose has no right to take down Minkevich’s photo. Since Minkevich was the one who took it, he must own the copyright, right? Web Sheriff doesn’t seem to think so.

“We can gladly confirm that all official / accredited photographers at [Axl Rose] shows sign-off on ‘Photography Permission’ contracts / ‘Photographic Release’ agreements which A. specify and limit the manner in which the photos can be exploited and B. transfer copyright ownership in such photos to AR’s relevant service company,” the company told TF in a statement.

Now, TorrentFreak reached out to Minkevich, who had no idea this takedown blitz was underway. He confirmed that some concerts do indeed make photographers sign these types of agreements, but couldn't recall if this concert included one or not. Web Sheriff, who certainly should be able to produce the agreement, having taken the lead on the copyright claims, isn't doing so. When asked, Web Sheriff's response was instead to insist that even if the photographer had not signed an agreement — leading me to believe he probably didn't –, that Rose would still be able to claim ownership over the photo.

“[If a photographer] was there and taking shots without permission or authority, then other considerations / factors would come-into-play as to what such individuals can and cannot do in terms of attempting to commercially exploit the resultant images of someone else’s show,” TF was informed.

I would politely ask Web Sheriff what the sweet child of mine it is talking about here. Unless the photographer transferred copyright of the photo over to Axl Rose, the photographer retains copyright ownership over it. One would think that if any transfer had actually taken place, Web Sheriff would simply produce it, but it hasn't. If no transfer ever occurred, Web Sheriff is simply wrong in claiming copyright over the image. Indeed, Minkevich even mentioned to TorrentFreak that the photos are infringing, but that they are infringing on his and/or the Winnipeg Free Press' copyrights. And even that may not be true, given the room that Fair Use carves for using copyright images.

And the best part of this is that Axl Rose employed Web Sheriff to do all of this to keep the unflattering images out of the public sphere. How is that working out for him?