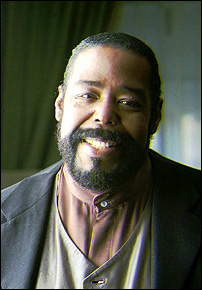 Deep-voiced soul singer Barry White was resting at home while his search for a kidney donor continued, his manager said.

White, 58, had dialysis treatment in September to stabilize his condition, a complication from years of chronic high blood pressure.

"I see him every day, and he's doing better every day," manager Ned Shankman said Wednesday. "He's a candidate for transplant. We're still looking for a match."

White is known for romantic songs such as "Can't Get Enough of Your Love, Babe" and "You're the First, the Last, My Everything."

He had been working on a new studio album before undergoing treatment.

White was hospitalized in August 1999 for a blood pressure problem.