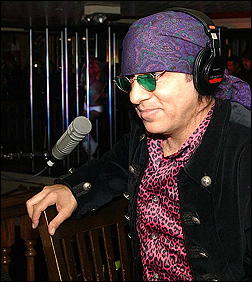 "Well, we're gonna continue," he told Launch. "We're gonna step things up. Really, this first four months is really just a quick hit warm-up. The real tour is gonna start in March, April, I think. You know, we're gonna probably start camping out in cities. Right now, we're doing nothing but one-nighters, literally–I mean, we have not done two shows anywhere, and we won't through December–just sort of to introduce the record to as many different cities as we can."