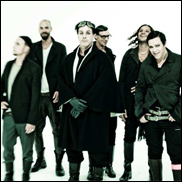 Rammstein's pyrotechnic-laden performances has been popular in Europe, where they play capacity level soccer stadiums, the band spent nearly a full decade without setting foot on North American shores. In December 2010, the sextet returned to North America for two sold out shows including a performance at Madison Square Garden. Rammstein followed with a 9-day trek of major North American cities in spring 2011.

The tour announcement comes on the heels of news of the band's first retrospective release, Made In Germany 1995 – 2011, which will be available in North America (through a distribution deal between Universal Germany and Vagrant Records) on December 13th. Rammstein recently released "Mein Land,"
a new four-track digital single that features two new songs: the title track and "Vergissuns Nicht" as well as remixes from BossHoss and Mogwai. A video directed by Jonas Akerlund for "Mein Land" is also currently featured Rammstein.com. Rammstein's most recent full-length album, Liebe Ist Für Alle Da, debuted at #13 on the Billboard Top 200 in October 2009.

Rammstein first toured America in 1998, touring with a set based on their Grammy-nominated breakthrough second release, Sehnsucht, featuring Du hast, the song that brought attention to the band. During their 1998 Family Values tour, praise was high, as well as indignation: band members were jailed in the US on indecency charges due to the highly provocative live show.