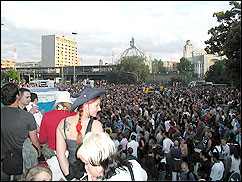 BERLIN, GERMANY (CelebrityAccess MediaWire) — Organizers of Germany’s hedonistic Berlin Love Parade has confirmed that they have been forced to cancel the festival for the second year in a row after failing to secure the necessary funding for the dance event.

They hope to revive the formerly-annual July event in time for Germany’s hosting of the World Cup in 2006.

The parade began as a small techno rave in 1989 before growing to attract up to 1.5 million people at its peak in 1999.

“We will do everything we can, in cooperation with the city-state of Berlin, industry and the media, to find a way to make a comeback,” Sabine Bremermann of the Love Parade said in a statement.

City officials pinned the blame for the cancellation on the parade’s management, claiming they failed to move with the times.

In the past, organizers left Berlin to cover the costs of putting on the parade and the clean-up operation by claiming the event was a political demonstration. A court ruled in 2001 that it was instead a commercial venture and the city was not liable to pay for the expenses.

The Berlin Love Parade spawned a number of spin-offs around the world, including festivals in Switzerland, Chile and the U.S. The Berlin event remained the biggest, attracting world-renowned DJ and thousands of visitors to the German capitol city to experience the hedonistic atmosphere.

Although attendance had been declining, the 2003 event was hailed as a successful party, but, as in previous years, it incurred financial losses. –by CelebrityAccess Staff Writers