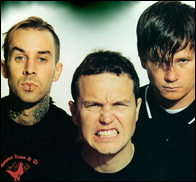 LOS ANGELES (CelebrityAccess MediaWire) — Pop-punk icons Blink-182 have pushed their planned European tour back to 2012 in order to complete work on their new album – the first the band's produced since their reformation.

The band's new itinerary for 2012 dates includes some additional dates in Ireland and Scotland.

A statement on the band's website read: "It is with heavy hearts that we have to announce our planned 2011 European Summer tour has been rescheduled. When we booked the tour last year – we were confident that we would have the new album out before the Summer. Turns out wewere mistaken as the album is taking longer than we thought and won't be outtill later this year. We hoped we wouldhave some new songs to play rather than do another 'greatest hits tour' whichyou all saw last Summer. As much as weknow our fans would be cool with that – we feel that we owe you guys somethingnew when you spend your money to come see us. Frankly – it's what needs tocontinue for us to remain vital. Thethree of us are working very hard to do what we set out to do when were-formed…get a new blink-182 album recorded. Apologies to all of our fans who have bought tickets and were lookingforward to the Summer shows but we'll be back soon with the rescheduled datesin Summer 2012 – have a new album out and be able to play new songs for you all.Thanks for all of the continued support and understanding."

Tickets purchased for affected shows will be honored at the rescheduled dates.

Original tickets will be valid for the rescheduled dates. For further information or queries regarding therescheduled dates please contact the ticket agent where you purchased yourtickets