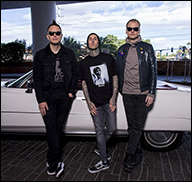 LAS VEGAS (CelebrityAccess) — Palms Casino Resort and Live Nation are teaming up with the Grammy-nominated alt-rock outfit blink-182 for a residency for the band at the newly renovated Pearl Concert Theater in Las Vegas.

The residency kicks off on May 26th, with sixteen shows scheduled through the spring, summer, and fall, with the final date in November.

“blink-182 is one of those bands that crosses over multiple genres of music, and also transcends many generations of music lovers. They’re a perfect fit for a true rock residency – our first at the Pearl,” said Palms Casino Resort General Manager Jon Gray.

The residency will be one of the first major collaborations for the Pearl Concert Theater since it completed renovations as part of a comprehensive $620 million property-wide overhaul at the resort.

blink-182 has enjoyed a resurgence in popularity of late, with their most recent album “California” finding traction on the Billboard Alternative Albums chart. The band consists of Mark Hoppus (vocals/bass), Travis Barker (drums), and Matt Skiba (guitar).

“When the Palms asked us to do a residency here in Vegas, we said ‘Absolutely!'” said blink-182’s Mark Hoppus. He jokingly continued, “Now, we just have to cast our show girls, create our set list – a true throwback of Vegas classics with Sinatra, Liberace. Maybe we can even marry someone on stage…The possibilities in Vegas are endless.”