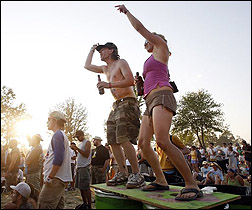 MANCHESTER, TN (CelebrityAccess MediaWire) — Another sold-out Bonnaroo has come and gone. Dust, Tennessee heat and great music all came to a close on a Sunday that saw performances from perennial festival favorite, Widespread Panic headlining the main stage. The boys from Widespread Panic closed out the main stage, playing a mix of old favorites like "Space Wrangler" as well as covering some material from other bands like Black Sabbath's "Fairies Wear Boots."

When asked about Widespread Panic's regular attendance at the festival, band member John Bell told press that "They've been able to avoid the trappings of corporate garbage that you tend to see at these things."

While still steeped in the heady herbal tea of Jam Bands, the festival has been trying to reach a larger audience in recent years, creating strong and diverse lineups. This year's festival featured performances ranging from traditionally focused artists such as Gillian Welch and Ralph Stanley with the Clinch Mountain Boys to DJ Shadow (who seems to have announced his retirement on-stage) and Girl Talk.

Some of the highlights of the 4 day festival included an evening set by Brooklyn alt-rockers The Hold Steady, The Flaming Lips arriving on stage in a spaceship and then proceeding to blow the crowd away with a visual and aural feast and a nice turn on stage from Regina Spektor.

Some of the disappointments of the festival included a Police appearance that was reportedly cut short by an hour and British songstress Lily Allen who appeared on stage while cradling a half-empty bottle of Jaeger and asking the crowd if they were "As drunk as I am."

Held on a 700-acre farm in Manchester, TN, the festival and sold out with some 80,000 music fans in attendance. Its also become one of the highest-grossing, (if not the highest grossing) festival in the world with Billboard reporting their take this year at around $17 million. The event this year had very few problems reported, save for one unfortunate 25-year-old Kentucky man named Cody Conover who was found unconscious at the festival and later declared dead after being transported to a local hospital. Police are looking into heat and/or drugs as a possible cause of death. – CelebrityAccess Staff Writers