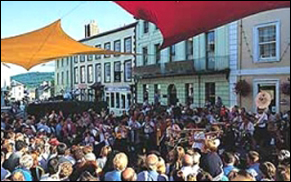 CARDIFF, UK (VIP-NEWS) — The company behind the Brecon Jazz Festival in Cardiff, UK is being wound up, two months after telling creditors it was suspending payments.

The festival, which celebrated its 25th anniversary in August, said its future was now in "serious doubt".

Its board blamed bad weather for poor ticket sales and said it "suffered a substantial financial loss".

A creditors' meeting has been called for 9 January and the festival company has ceased trading.

A statement from the festival said although pre-event ticket sales were good, the bad weather during the festival resulted in poor sales over the weekend.

"In turn this affected income from camping, stall fees and merchandising. A number of promised sponsorships and grants did not materialize and broadcasting and advertising income was lower than planned," said the festival board in a statement.

It added that the "sad death" of pianist Esbjorn Svensson, of headline Swedish act EST, in a diving accident only weeks before the event left a "serious hole in the program".

A local hotel also pulled out as a venue late on which meant extra marquee and site costs.

Organizers estimate that the weekend is worth £4m to the local economy.

The festival board said it was "with regret" that it had requested Vaughan Jones, a Cardiff-based insolvency practitioner with BN Jackson Norton, to assist in winding up the affairs of the company.

Mr. Jones said if the festival was to continue it would have to be completely new venture.

He said of the winding up: "That means the company has ceased trading. Papers went out to creditors yesterday and we will be holding a creditors meeting on 9 January in Cardiff.

"At the meeting a statement of affairs, stating the company's assets and liabilities, will be revealed."

John Payne, festival chairman, added that Brecon Jazz "has been an important part of the Welsh cultural landscape for the last 25 years and its possible demise is a matter of concern to the community at large".

Paul Ashton, a Powys councilor and festival trustee, said the company was the third to have run the festival, adding: "It will be sad to see it go.

"As happens with events, it gets larger and larger and it's difficult to keep it a community event," he told BBC Wales.

"It may rise phoenix-like from the ashes."

He said an economic impact study commissioned after the previous festival found around £4m was brought into the area by the festival, affecting places as far away as Cardiff.

Over the years the festival has attracted top names from the jazz scene, including Courtney Pine, Wynton Marsalis, Pat Metheny, Chico Hamilton and Dr John. The late George Melly was a leading supporter and regular performers included Jools Holland.

This summer, singers Cerys Matthews and Joan Armatrading were two of the headline acts at an event which has broadened over the years to include acts from outside the jazz world.

The festival also lengthened to start on a Thursday night, although it had been restricted in recent years from organizing street music because of safety concerns.

It regularly attracted up to 70,000 visitors from all round the world and received financial assistance from Arts Council of Wales, HSBC, Powys council and the Brecon Beacons National Park Association.

Accounts posted on the Charity Commission website for the financial year ending March 2007 showed Brecon International Festival of Jazz Limited had a deficit of £66,100.

A spokeswoman for the Welsh Assembly Government said it was a aware of the financial difficulties faced by the festival.

"We understand that the Arts Council of Wales (ACW) and Powys County Council, as the key funders, are working with the festival's Board of Trustees to try and find a positive way forward for the festival," she said.

Nick Capaldi, chief executive of the ACW added: "Naturally we are worried by the fact that the festival was not as successful as hoped this year. We are working closely with HSBC Brecon Jazz Festival and its partners to find a satisfactory resolution".

Cardiff jazz musician Mike Harries, of Mike Harries and the Root Doctors, who has performed with two of his bands at 23 out of the 25 festivals, said it would be "tragic" if the festival were to go under.

He was present at a meeting between the festival's first director, the late Jed Williams, and the committee which set up the festival, and his former group, the Mike Harries Band, were the first to perform on stage at the founding event.

He said: "It would be tragic certainly as far as myself and musicians in my band [are concerned].

"It would be very unfortunate and I think actually it would be a very sad thing for the whole of jazz in Wales.

"It's encouraged so many people of so many age groups to make music and has given us some wonderful times in Brecon.

He added: "I wish it had started when I was 25." According to BBC