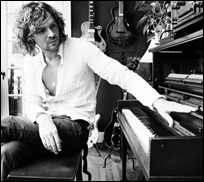 NEW YORK (CelebrityAccess MediaWire) — Musician, songwriter/producer and co-founder of The Raconteurs, Brendan Benson is launching his own record label and publishing company, Readymade.
This spring, Readymade will make its debut on the international stage with new releases from Benson and the first artist signed to the label, Young Hines.

Benson will release What Kind of World on 4/21 through www.brendanbenson.com
to coincide with his son's 2nd birthday with a 4/24 street date. Hines will release Give Me My Change on 4/10. Benson will be showcasing his new album at SXSW 2012 as well as on May tour dates where Young Hines will support in the U.S.

The label will also release the upcoming Benson produced album from Irish duo The Lost Brothers.

Readymade was born in the 90's when Benson released the Wellfed Boy demos under the imprint as a 12" vinyl. At the time Readymade was merely a concept due to a lack of resources to build a proper record label. Over a decade later Benson partnered with manager Emily White, who brought the idea to fruition, making Readymade a legitimate label around Benson's musical output.

Says White, "Brendan produced 5 albums in 2011, including his own. Launching Readymade gives us the option of a release platform tailored to each album under the same home. We wanted a way for Brendan to be able to create music when and how he wants and be able to put out the music sans any barriers. The answer to what we were looking for is Readymade."

Launching an artist-owned label has its obvious creative and business benefits from artistic freedom to master ownership. But it can hit roadblocks when it comes to funding the team members that help promote a new release.

Rather than forego promotion or production quality, Benson and his manager developed a team of individuals and companies within the industry to work on album releases for a commission taken from music sales and song placements. The new approach allows them to operate without front-end costs while providing greater motivation and potential payoff for all parties involved.