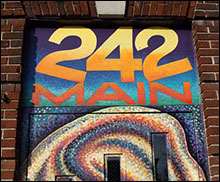 BURLINGTON, VT (CelebrityAccess) — 242 Main, one of the oldest all-ages punk venues in the Northeast, if not the US, will be shuttering, at least for now as the building that hosted the venue is being closed due to ongoing structural issues.

According to Vermont's NPR Radio, the club held its final show on Dec. 3rd, with more than 21 bands who played to the packed venue over the course of the day.

Located in the basement of the city's Memorial Auditorium, the venue was originally launched as a teen center through Mayor Bernie Sanders' youth office, run by Jane Driscoll, whom Sanders later married. Originally envisioned as a substance free art center for the city's teens, the center hosted everything from murals and visual art to panel discussions, open mic nights and concerts, all organized by the community.

In the 1990s, after a brush with being shuttered, oversight of the venue was taken on by the city's Department of Parks, Recreation and Waterfront as a program site and has since been running a roster of programs aimed at supporting the city's youth, including an annual Rock Music Camp.

In the past year 242 Main has hosted about two to three shows per month, mostly punk music with a few folk singers, Candice Holbrook of the Department of Parks, Recreation and Waterfront told the Burlington Free Press.

“It’s beacon of community and hope for Vermont and a common ground for youth and adults to come together and share experiences,” Ryan Krushenick, the singer for Cbrnsnke, one of Saturday's bands told NPR.

Community members have organized a petition for the Mayor's office to help find a new permanent home for 242 Main, but until then, the city will be organizing concerts and other events at Fletcher Free Library and around the city. These will be billed under the name "242 Main Presents," the Burlington Free Press said. – Staff Writers