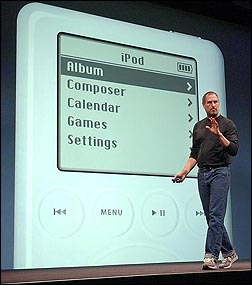 (VIP) — An online music service for Apple computer users in the United States has sold more than five million songs in the two months since it was launched.

The iTunes Music Store allows customers to download for 99 cents (62p) per song, without subscription fees.

The service is being hailed as the first concrete evidence that computer users are willing to pay for music online rather than download pirated copies for free.

"It clearly illustrates that many customers are hungry for a legal way to acquire their music online."

So far the iTunes service is accessible to fewer than 5% of the world's computer users – those owning an Apple Macintosh and living in the United States.

A Windows version of iTunes is planned for later this year, and an overseas expansion is also on the cards.

Microsoft has indicated that it too wants to launch an online music service for its users.

(CelebrityAccess News Service) — Infinity Systems, a leading manufacturer of high-performance loudspeakers and systems for home and car audio, has signed on as a supporter of the Farewell I tour of the Eagles and their charities. Infinity will maintain a highly visible presence at all of its 46 stops. The company’s name will be featured on signage at the venues, as well as on programs, tickets, advertising and other media. Infinity’s extensive support program will include national and local media and retail advertising, a Web site-based consumer sweepstakes and other activities.

Eli Harary, Infinity brand manager, noted: “We are truly honored to support the Eagles on their Farewell I tour. The Eagles’ drive for musical excellence along with their powerful emotional impact goes straight to the heart of their audiences. These are the very same qualities that Infinity has always aimed for in its line of high-performance audio/video products. Our commitment to the musical experience is both emotion and art, that’s why we believe the Eagles are a perfect match.”

In-store advertising will promote the Farewell I tour, provide consumers with information about the contest and direct them to the contest Web site. — edited by Bob Grossweiner and Jane Cohen

(CelebrityAccess News Service) – SIRIUS has crossed the 100,000 subscriber mark this on June 20 when SIRIUS had 100,233 subscribers on its nationwide service of 60-commercial-free music streams and 40+ streams of news, sports and entertainment. "This is an important milestone for SIRIUS, which underscores the growing interest in our service as the premium provider of nationwide satellite radio entertainment," said Joseph P. Clayton, president and CEO of SIRIUS. "We're seeing consumer and industry support building both in our numbers and in recent reviews touting our superior programming."

"We reached our subscriber milestone without the benefit of these new products in the market place," added Clayton. "With the introduction of the Plug & Play units this summer, home products this fall, and the roll-out of the balance of our OEM automotive programs this year with Ford, Mercedes, Audi and Infiniti, we believe that momentum will continue to build."

The new Plug &Play products adapt to existing audio systems and can be easily installed by either the retailer, or the purchaser. Currently, the Kenwood Here2Anywhere is on sale at Best Buy, Circuit City, Tweeter, Ultimate, the Good Guys and other mobile audio outlets, including Crutchfields, at a retail price of $99.95, plus approximately $69.95 for either the car or home adapter kits. The Audiovox S.R.S. Satellite Radio Shuttle will also be priced at $99.95.– edited by Bob Grossweiner and Jane Cohen

(CelebrityAccess News Service) – Verizon Wireless, the nation's largest wireless provider, will sponsor the Lollapalooza 2003 Concert Tour. Verizon Wireless will be on site with TXT Messaging contests, giveaways and interactive wireless demos to keep fans connected throughout the festival and entertained between acts. Customers can take advantage of TXT alerts and chats, and participate in contests to win concert ticket upgrades and backstage passes the day of the festival.

"The Lollapalooza sponsorship gives Verizon Wireless an opportunity to showcase the amazing advances we have made in wireless technology to a tech-savvy audience," said Bill Stone, vice president of marketing, Verizon Wireless. "This 2003 tour is one of the most exciting young adult events of the year and provides an incredible venue where we can interact with one of our most important market segments." — edited by Bob Grossweiner and Jane Cohen