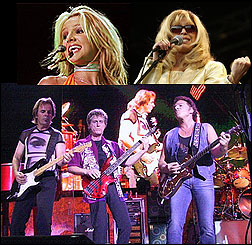 (CelebrityAccess News Service) – The Hollywood Walk of Fame has selected its stars to receive stars in 2004 in film, television, music, theater, radio and posthumous. They are:

Posthumous: Elizabeth Montgomery, Dr. Seuss and Ethel Waters. "There's a favorite on this list for everybody. We have both young and veteran performers and local, national and international stars," said Hollywood Walk of Fame chairman Johnny Grant. "The induction ceremonies will generate a lot of excitement for our residents and visitors from around the world."–edited by Bob Grossweiner and Jane Cohen

Comedian Chris Rock will once again serve as host for the August 28 event at Radio City Music Hall, where the awards show debuted in 1984.

Nominees, performers and presenters will be announced at a later time.– edited by jane Cohen and Bob Grossweiner

LOS ANGELES (AP) — Lionel Richie was dancing on the ceiling Friday after receiving a star on the Hollywood Walk of Fame.

An estimated 500 people gathered at the Hollywood Boulevard ceremony and sang "Happy Birthday" to Richie, who celebrated turning 54 on the day of the event.

Among those in attendance were comedian Jay Leno, who teased the singer about the location of the star. "What an honor to be in front of a parking garage," Leno said.

"Let me tell you why I chose this location," Richie jokingly responded. "This will not always be a parking structure. It will be a fine building with Lionel Richie's name at the front door."

Richie is an original member of "The Commodores" whose solo hits include "Truly," "Hello," "Dancing on the Ceiling" and "All Night Long."

The often reclusive Jackson made a surprise appearance and garnered a huge ovation as he danced briefly with the 70-year-old Brown, who also performed "It's a Man's World" and "Sex Machine."

"Nobody has influenced me more than this man right here," an emotional Jackson told the audience moments after wrapping a cape around Brown's shoulders.

Brown, a seminal figure in rock, pop and soul, is also known as "Soul Brother No. 1" and the hardest working man in show business. He is currently on a national concert tour.

BET awards recognize people of color in music, film and sports categories. They are voted on by record label executives, news media representatives and fans.

The third annual awards show was broadcast live on the East Coast and on a taped-delayed basis on the West Coast on the Black Entertainment Television network. Actress Mo'Nique was host.

Before the event, police and federal agents arrested three men and detained six others who arrived with Snoop Dogg. The rapper was not questioned, but authorities spoke with his lawyer.

Two of the three arrested were wanted on misdemeanor crimes, and another on parole violations, authorities said. The six others were armed and identified themselves as Snoop Dogg's security detail, said Joe Gordon, assistant special agent in charge for the federal Bureau of Alcohol, Tobacco, Firearms and Explosives.

They were released but Gordon said the case would be turned over to federal prosecutors and could result in charges being brought against Snoop Dogg for being a felon with armed bodyguards.