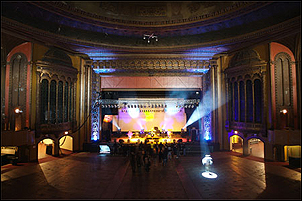 CHICAGO (CelebrityAccess MediaWire) — Texas-based promoter C3 Presents has notched another major victory in the increasingly competitive Chicago market when they signed a deal on March 3rd at the Congress Theater.

The deal will give the Lollapalooza organizer exclusive booking rights for the 4,200 capacity venue which has played host to concerts by major touring artists such The Killers and Nine Inch Nails in recent years, the Chicago Tribune reported.

The deal is part of an ongoing effort by C3 to expand their presence in the market. Last month, the promoter also announced a partnership with with facility management outfit SMG in a five year deal to book Chicago's Soldier Field and have stated that they intend to open an office in the city, lining the C3 up to be a major competitor for Live Nation and Jam Productions in the region.

"We love this market and we want a bigger presence." C3 Partner Charlie Walker told the Tribune.

The Tribune also reported that the deal came as a surprise to Live Nation, which has several shows booked at the venue in the next few months. "We had no idea" Live Nation's Scott Gelman said "I guess we’ll have to make some phone calls."

Walker though, is leaving the door open for other promoters booking events at the theater. "I don’t know if the city’s big enough for three major promoters, but everyone has a niche," he said. "We're not exclusionary. We control the calendar [at the theater] but if another promoter brought something in that works for us, we’d consider it." – CelebrityAccess Staff Writers