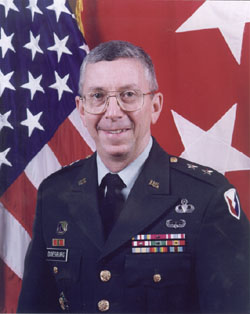 At a time when our news media, Capitol Hill and US Postal Service have been attacked with anthrax, that has caused the death of three people and has required thousands of people to seek treatment, the IAAM's upcoming International Crowd Management Conference has a timely guest speaker.

Major General John C. Doesburg, U.S. Army Soldier and Biological Command, will deliver the keynote address Nov. 18 at the Wyndam Emerald Plaza hotel during the Nov. 17-20 San Diego conference. Doesburg will review preparations for the war on terrorism and address the military's capability of chemical and biological response. Other portions of the program will be held at the US Grant Hotel approximately four blocks away.

The general is one of several additions to the ICMC program following the Sept. 11 attacks. Security officials from the National Hockey League, Major League Baseball, the National Football League and the National Basketball Association will discuss measures they are taking in the wake of terrorist attacks. They will also focus on the future of security and safety among facilities and sports teams.

Other separate sessions include representatives from the US Olympic Organizing Security Planning Committee who will speak on security issues; town hall meetings on specific facility types; security contractors and law enforcement; Basics of Crowd Management; Day-Of-Event Cancellations Procedures; How to Deal with the Media; Mosh Pit Designs & Safety; Proper Queue Lines & Package Inspection Techniques; Understanding The Expert Witness; Establishing Policies & Procedures; Alcohol Management; and motivational speaker Robert Stevenson whose topic is "How to Soar Like An Eagle In A World Full of Turkeys."