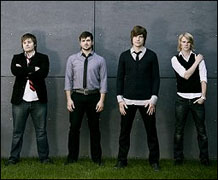 ABBOTSFORD, BC (CelebrityAccess MediaWire) — Dozens were injured when stage scaffolding fell, causing the stage to collapse and plunging approximately 70 people into a church basement during a crowded Christian rock concert on Friday, Canwest News reported.

According to witnesses, the scaffolding, which had been supporting lighting fixtures, broke free and crashed into the crowd on the stage. The load proved to be too much for the staging and it subsequently collapsed, dropping the crowd approximately 15 feet into the church basement.

"People were jumping and I started to jump," 13-year-old Alyx Peckinpaugh told CanWest "I ran to the wall and yelled for my friend. I couldn't find her, and then I saw her. I ran out to the hallway and then outside." Peckinpaugh narrowly avoided being involved in the fall.

Thirty-two people were injured and treated at local hospitals, with three sustaining serious injuries, reports said. More than 1,000 people had turned out for the concert by Christian rockers Starfield.

The concert had been organized by the band and their management, who rented the church and sold tickets to the event. The band declined to comment on the incident. – CelebrityAccess Staff Writers