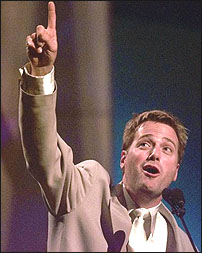 Total sales of contemporary Christian and gospel albums ended the year at 49,664,000 units, according to Nielsen SoundScan. 2001 sales were 49,965,000 units. Album sales at Christian chain retailers and mainstream outlets were up, eight percent and 2.4 percent respectively, while Christian independent retailers experienced a 10.5 percent decline in 2003. The overall music industry is reporting a decline of more than eight percent in CD sales.

"2002 started strong for Christian and gospel music sales, following our biggest year ever in 2001," said Breeden. "It appears that alongside a lean release schedule, the slower economy finally reached us a little in the fourth quarter to bring us even in sales over the year. Still, in the current overall music industry environment, which has sales down for the second straight year, we are pleased that our format held steady. And, we are optimistic about the first quarter of 2003; its potential for putting us back on a strong growth track is great."

Worship music continues to be a big story in Christian music. Michael W. Smith, the 2002 Dove Award Artist of the Year, leads the worship trend and is the artist story for 2002. Smith's "Worship" album ended the year at number four on the Christian charts, and since its release on September 11, 2001, it has never been out of the Top Ten. That Platinum record was followed up by "Worship Again," which sits at number 10 at year's end. MercyMe's worship- focused debut record "Almost There" and Integrity's "Songs 4 Worship: Shout to the Lord" were the sixth and seventh biggest sellers in 2002.

Also notable in 2002 was the return of Christian and gospel music's top-selling Kirk Franklin and Amy Grant. Franklin's first album since 1998, "Rebirth of Kirk Franklin," ended the year as the third best-selling record in Christian music. Grant returned after a five-year hiatus with "Legacy … Hymns & Faith" and has the 12th best-selling record for the year. And, the WoW brand continued to show muscle with "WoW Hits 2003" and "WoW Christmas" scanning more than 750,000 units in the last quarter.

"It is unusual for our industry to have so many heavy hitters releasing projects in the early part of a new year, but it's great news," said Breedon. "I especially think this will be a boost for independent Christian retailers whose sales rely on these core artists. Across the board, all retailers who carry Christian music will have much to sing about in the coming months."