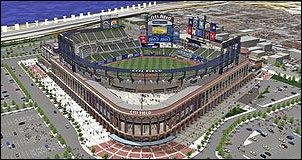 The agreement for Citigroup to name the yet-unfinished Mets stadium for $20 million a year for 20 years is far and away the largest deal of it's kind. The deal includes not just naming rights for the stadium, to be known as Citi Field when it opens in 2009, but extensive branding throughout the stadium, everything from scoreboards to ATM machine. It also contains provisions for electronic media as well, Mets TV, print radio and web presence will all integrate Citigroup branding.

"An unprecedented platform to promote our world-class brand, enhance our relationships with current clients, and attract new clients in our headquarters city and a strategically important market." said Charles Prince, Citigroup's CEO.

The deal may have re-invigorated a previously tepid interest in naming-rights. "There was a feeling that a lot of these deals were going by the wayside," Robert Tuchman, president-CEO of TSE Sports & Entertainment told Ad Age. "There was a lot of negative publicity on some, such as Enron, and the feeling was that a lot of these deals weren't going to be able to command a certain amount of money."

Can Citigroup turn the brand presence into ROI though? The Mets have a strong national market presence in the US and Japan and the high percentage of Latino players gives the team some cachet in Latin America, both markets that Citigroup hopes to raise brand-awareness in. Many fans had been supportive of naming the stadium after Jackie Robinson, or even keeping the previous name, Shea Stadium. New York fans tend to be strongly opinioned and the Mets seem to be taking a proactive approach to head them off at the pass. There has been a lot of buzz on the Mets website about how the new stadium will honor the previous stadium's storied history. – CelebrityAccess Staff Writers