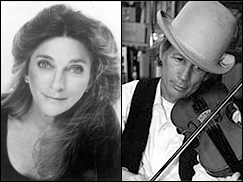 (CelebrityAccess MediaWire) —
Judy Collins will receive the First Amendment Center/AMA “Spirit Of Americana Free Speech” Award while John Hartford will be recognized with the AMA President’s Award at the 4th Annual Americana Music Association Honors & Awards on September 9 at the Ryman Auditorium in Nashville.

“Alongside her stellar recording career, Judy Collins has worked for decades advocating and directly supporting a variety of important social and political causes,” said AMA Executive Director Jeff Green. “We are thrilled that Ms. Collins will be here to receive this award.”

The award will be presented by First Amendment Center Founder John Seigenthaler and Executive Director Gene Policinski. “Part of the First Amendment Center’s mission is to remind Americans of the value of exercising their right of free expression," noted Policinski. "This award recognizes artists like Judy Collins who have used their creativity and freedom of speech to make a difference.”

Collins will perform “Amazing Grace” during the evening. The Spirit Of Americana presentation is one of the highlights of the Honors & Awards each year. Previous recipients include Steve Earle (2004), Kris Kristofferson (2003) and Johnny Cash (2002); all three have appeared in person to receive them.

The family of John Hartford will accept the AMA’s President’s Award, which is traditionally given in posthumous recognition for outstanding contributions by an artist or group. “We all miss John Hartford very much, but his legacy is enduring,” said Green. “John made enormous creative and influential contributions throughout his amazing career, and it’s fitting that he and his family should receive this tribute at the first opportunity.” The award will be presented by AMA President Mark Montgomery. Arlo Guthrie will lead a gathering of the evening’s performers in singing Hartford’s ever-popular 'Gentle On My Mind.'"