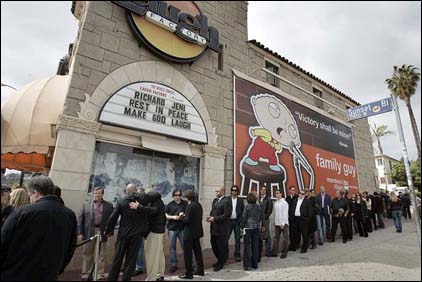 LOS ANGELES (CelebrityAccess MediaWire) — Colleagues gathered at the Laugh Factory in Los Angeles to honor Richard Jeni, who died March 10th of an apparent self-inflicted gun shot to the face.

Jeni, the reigning King of appearances on "The Tonight Show" was memorialized in a way befitting any stand up comic. His private wake was held at Jamie Masada's Laugh Factory on Sunset, where his comic peers took turns sharing memories of him.

The LAT reports the inside details as Jeni's famous jokes were printed on cards placed at each seat: "The way I see it, we're all on the Hindenberg. Why fight over the window seats?" "You know what the average person is? Average," "My mother never saw the irony of calling me a son of a bitch," "I think that's how Chicago got started. A bunch of people in New York said, 'Gee, I'm enjoying the crime and the poverty, but it just isn't cold enough. Let's go west.'”

Speaking before the memorial, Leno told the LAT that the comedy-tragedy link is a close one. "I think there might be something to it," said Leno, who recalled to the LAT a "long phone conversations in which Jeni would agonize over career moves".

"I think of all the people I know that committed suicide, and most of them are comedians…. And then there's all the guys who overdosed. That's a real long list."

"The thing with comedians is, it's their job to make people laugh, and to do that well you become able to hide and mask your own feelings," Leno said to the LAT. "You see a guy and ask him how he's doing and he tells a joke, you figure, 'Oh, he made me laugh, he must be OK.' "

At the Saturday memorial, many comics had their say of the New York boy that left us too soon. "Very few white men," Rodriguez dead-panned, "could wear a red jacket." Rodriguez had told the LAT he had seen his friend Jeni just days before the incident.

Richard John Colangelo came up in an Italian-American classic Scorsese styled neighborhood in Bensonhurst, Brooklyn, N.Y. The LAT tells of Jeni honing his craft by listening to Redd Foxx and pursuing open mike nights, until his break.

Jeni appeared on "The Tonight Show" in the mid-1980s during the Johnny Carson years and, according to Leno, had more return appearances than any other stand-up, especially after Leno took the show over, reported the LAT.

One man comedy specials on HBO and Showtime and a UPN series titled "Platypus Man" were under Jeni's belt. He starred with Jim Carrey in the 1994 "The Mask" and was also writer for the 77th Annual Academy Awards in 2005, hosted by his friend, Chris Rock, reported the LAT.

Jeni remembered: On religion: "You're basically killing each other to see who's got the better imaginary friend." Defining "Platypus Man," the title of one of his UPN series and one of his comedy specials: "An adult male human that attempts to mate frequently but spends most of its time alone."

"I always look for a woman who has a tattoo. I see a woman with a tattoo, and I'm thinking, OK, here's a gal who's capable of making a decision she'll regret in the future."