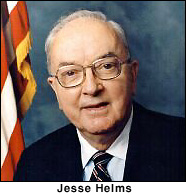 You're never too old to start rockin' and rollin'. Just ask 79-year-old Sen. Jesse Helms, the staunch conservative Republican from North Carolina, who with his grandchildren in tow, recently attended his first rock concert.

Invited by Bono to U2's June 14 concert in Washington, D.C., Helms noted, "It was filled to the gills, and people were moving back and forth like corn in the breeze, reports the Associated Press. "They had that crowd going wild. When Bono shook his hips, that crowd shook their hips."

Helms also said he turned down his hearing aids and put his hands over his ears during the concert because it "was the noisiest thing I ever heard. It was so loud I couldn't really understand what he was saying."

Last fall, Bono and Helms struck up a friendship when the rocker lobbied Helms on international debt relief.