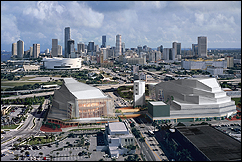 (CelebrityAccess MediaWire) — Construction costs for the Miami Performing Arts Center have increased again, bringing the total price to $446.3 million. The PAC received an additional $67.7 million for cost overruns last year, and was forced to ask for an additional $34.4 million this past week.

The money is needed to keep the center on schedule for its October 2006 grand opening, which is already 20 months behind its original scheduled unveiling.

In a memo to commissioners, County Manager George Benson said the biggest reason for the extra cost are the shortage of expert construction workers due to various downtown renovation projects, and the unusual number of hurricanes and rainy days that have delayed work on the building, according to the Miami Herald.

The developers plan to borrow the extra funds necessary from the Omni Area Community Redevelopment Area, which is collecting extra property taxes from soaring property values in the area around the planned PAC, and the Performing Arts Center Foundation, a private group already raising a great deal of money toward the construction and operating expenses. The foundation has pledged an extra $1.5 million per year for 20 years for the construction cost increase.

The planned arts center will include a 2,480-seat opera house, a 2,200-seat symphony hall and a 200-seat studio theater. –by CelebrityAccess Staff Writers