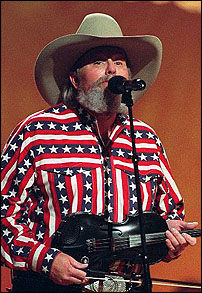 A post by country singer Charlie Daniels on his website against actors publicly opposing the war in Iraq, has resulted in the firing of a producer with the Great American Country cable channel.

According to The Tennessean, producer Tamara Saviano was fired after using her GAC e-mail account to tell Charlie Daniels' publicist that the country singer's views on Iraq were ''bulls… propaganda.''

In a prepared statement, GAC stated: "Our success as a television network requires that we have access to and good relationships with, country music artists, their management and their record labels…." "We believe her actions threatened to seriously damage relationships key to GAC's success."

The incident all started when Kirt Webster, Daniels' publicist, copied Daniels' website post and sent it to reporters and the country music media. The paper reports that Saviano received it on her personal e-mail, which she regularly had used for business and forwarded it to two industry friends, in which she said, "Did y'all see this? I think it's time for everyone to boycott Charlie Daniels. If you disagree with his angry, bitter open letter to Hollywood, pass this on to all of your friends and tell them to stop purchasing CDB music or concert tickets." In an e-mail to Webster, she said she was going to send it to 2,000 people, a remark she later said was meant as a "tongue-in-cheek joke."

The paper reports that while Saviano admits her initial e-mail included GAC's name, address and phone number at the bottom, she says GAC wasn't mentioned in subsequent e-mails.

The GAC statement continued: "Without consent of the company, the employee sent a communication — via an e-mail account she regularly used in her capacity as a GAC employee — calling for a boycott of Mr. Charlie Daniels' music concerts in opposition to his 'Open Letter to Hollywood."

Saviano has since retained high-powered Nashville lawyer David Raybin to go after not only the cable channel, but also Daniels' publicist.

"He's the one who initiated this," Raybin said of Webster, owner of public relations company Webster & Associates, in The Tennessean. "It was his intent to have her terminated."

According to Saviano, her expressed opinion was on her own time and on her own e-mail account.

"I just want to send a message that this isn't right," she said. "I believe that my personal convictions that I stated … have nothing to do with my job performance."