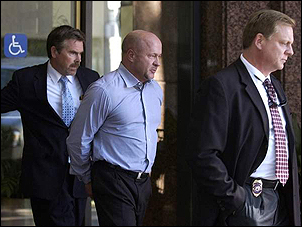 MONTGOMERY, AL (CelebrityAccess MediaWire) — Ronnie Gilley, the developer of the Country Crossing Resort and head of BamaJam Records was one of 11 people arrested by federal investigators on charges ranging from conspiracy and bribery to money laundering in an alleged effort to coerce public officials in an effort to legalize gambling in the state.

According to the indictments, Mr. McGregor and Mr. Gilley employed lobbyists, including defendants Thomas Coker, Robert Geddie and Jarrod Massey, in a full-scale campaign to bribe and coerce state legislators and others into supporting pro-gambling legislation that they favored. The two are charged with having offered huge sums of money and other benefits in exchange for the legislators’ votes. Defendants Larry Means, James Preuitt, Quinton Ross and Harri Anne Smith, who are all current Alabama state Senators, are charged with allegedly accepting or agreeing to accept – and, in some cases, demanding – these bribes, in the form of campaign contributions, campaign appearances by country music stars, fundraising assistance and other things of value.

Additionally, one of the defendants, a legislative analyst named Joseph Crosby, is charged with having accepted monthly payments of $3,000 from McGregor in exchange for taking official action to amend the pro-gambling legislation in a way that would benefit McGregor. Also today, a plea agreement with former lobbyist Jennifer Pouncy was unsealed. Pouncy has pleaded guilty to one count of conspiracy for her role in the vote-buying scheme.

The defendants are also said to have employed methods straight out of a spy movie to attempt to conceal their alleged criminal activity, including repeatedly calling one another on what they perceived to be “safe” phones, meeting with one another in person instead of using telephones to communicate, and agreeing to use "backdoor" ways to transfer campaign and other contributions in order to avoid detection.

The defendants were granted unsecured appearance bonds of between $100,000 and $500,000 each and McGregor was required to wear an electronic ankle bracelet.

"The alleged criminal scheme was astonishing in scope. Indeed, as alleged in the indictment, the defendants’ corrupt conduct infiltrated every layer of the legislative process in the state of Alabama. " Assistant Attorney General Lanny A. Breuer said. – CelebrityAccess Staff Writers