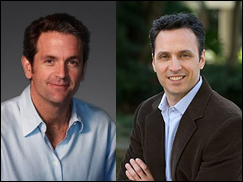 Prior to joining Playdom as CEO in June 2009, he was President of Global Publishing and Chief Operating Officer of Electronic Arts Inc., where he led the company’s online and mobile business units and its strategic expansion into online and social games. He previously served as President and CEO of Revolution Health and CEO of Ticketmaster, which included Match.com, CitySearch.com and Evite.com.

Pitaro comes to Disney from Yahoo!, where he helped to expand the search provider's original video, branded entertainment and editorial content. Pitaro led the successful expansion of Yahoo! Sports prior to being named to lead all of Yahoo!’s media properties, including its news, finance, entertainment and lifestyle sites. Previously, Pitaro ran Business Affairs for online music site Launch Media and practiced law at several New York firms.

As Co-Presidents, they will be replacing former President Steve Wadsworth, who over many years established a firm foundation for DIMG’s growth. Pleasants and Pitaro will report to Iger and will co-manage DIMG enterprise functions, including business affairs, finance and human resources. They will assume their new roles on October 18, 2010. – CelebrityAccess Staff Writers