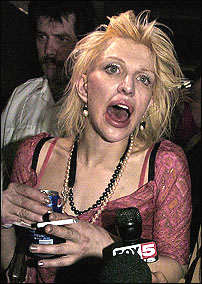 Rocker Courtney Love pleaded innocent on Thursday to charges of assault and reckless endangerment for allegedly hitting a fan in the head with a microphone stand in March.

After the arraignment, she delivered a rambling speech in a women's bathroom about the ex-boyfriend whose Los Angeles home she was accused of breaking into last year.

Love was in court Thursday because she allegedly hit Gregory Burgett with the stand as she performed at a club on March 18, a few hours after a bizarre appearance on David Letterman's "Late Show" in which she lifted her shirt to expose her breasts at least six times.

She was arrested after Burgett, 24, of London, Ky., needed three staples in his head and said he wanted to press charges, police and witnesses said.

Love arrived nearly two hours late for Thursday's arraignment. After the plea, Judge Kathryn Freed released Love on her own recognizance; the case was adjourned until June 28.

Her attorney, Scott Tulman, said the length of time until the next hearing could allow Love's case to be resolved out of court.

"We're discussing this with the (district attorney's) office and are hopeful that we can resolve this amicably," he said.

A swarm of reporters then followed Love into a restroom, where she launched into a stream-of-consciousness harangue about ex-boyfriend Jim Barber that also touched on actor Russell Crowe, her daughter, Frances Bean Cobain, and her late husband Kurt Cobain's Nirvana bandmates, Dave Grohl and Krist Novoselic.

"You do not sleep with married men," Love said during the impromptu news conference in the women's bathroom at Manhattan Criminal Court.

Love, 39, filed a lawsuit Dec. 15, 2000, against Lesley Barber, the former wife of Jim Barber, an executive at Geffen Records. The suit was later settled.

The lawsuit charged that Lesley Barber stalked her, threatened to burn her house down and ran over Love's foot.

Meanwhile, Love faces misdemeanor charges in Los Angeles of being under the influence of a controlled substance and disorderly conduct after being arrested for allegedly trying to break into Jim Barber's home on Oct. 2.

Love, whose husband killed himself in their Seattle home in 1994, gained independent fame with her band Hole and her role in the film "The People vs. Larry Flynt." Love has admitted using heroin in the past but has said she has cleaned up her act.