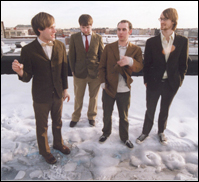 THE BLOGOSPHERE (CelebrityAccess MediaWire) — American Band, Creaky Boards, originally claimed that Coldplay's song 'Viva La Vida' was taken from a song they had written a year prior to 'Viva La Vida's' release.

Ironically the name of the song that Creaky Boards claimed was plagiarized is titled 'The Songs I Didn't Write.'

In a video posted on YouTube, the video sharing website, the group's singer said "'The Songs I Didn't Write' bore a striking similarity to Coldplay's new single."

Andrew Hoepfner, the lead singer of Creaky Boards, had claimed that Chris Martin has been to a Creaky Boards show and heard the song before releasing 'Viva La Vida.' These claims have now been thwarted by The Creaky Boards themselves.

"As this thing unfolds, I'm not sure if there was any copying going on," he said. "I think it's possible that Coldplay and I are just heavily influenced by 'The Legend of Zelda [a fantasy adventure computer game].

According to Telegraph.co.uk, Coldplay had categorically denied the allegations.

"We totally refute their claims," he said. "Chris has never heard of the band. On the night that they claim he was watching them, he was actually working at the Air Studio in London." –by CelebrityAccess Staff Writers