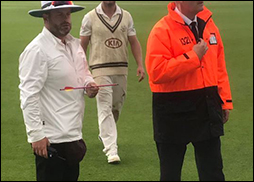 KENNINGTON, UK (CelebrityAccess) — A professional English league cricket game was canceled and the stadium evacuated after an arrow was fired onto the field during the match.

According to the Associated Press, more than a thousand spectators were told to take cover before being evacuated from the Kia Oval cricket stadium in South London after the sharp object landed on the field.

“It was a pretty tasty arrow with a proper metal end,” said Surrey team captain Gareth Batty, who was playing at the time, told the AP. “Someone saw it in flight, there was a noise when it landed but it happened so quick. It is a deadly weapon for sure. If it had hit someone it would have caused some serious damage.”

Police described the projectile as an arrow or crossbow bolt and are investigating where it might have come from.

“It is pure speculation where it came from because it is a very dense area around the ground,” Surrey chief executive Richard Gould told the Associated Press. “We are investigating reports that there was a noise on the roof of the OCS Stand but we haven’t been able to get up there to see whether it was the projectile ricocheting off the roof or a separate projectile."