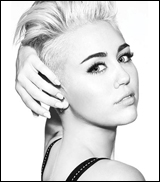 MONTERREY, Mexico (CelebrityAccess) — Miley Cyrus sparked controversy, offending some fans and possibly violated the law during a concert in Monterrey where she allowed herself to be spanked with a Mexican flag.

During a performance on Tuesday, Mexican Independence Day no less, one of Cyrus' backup dancers used a Mexican flag that had been thrown on stage in a number of suggestive ways in relation to the oversized plastic derriere that Cyrus was wearing.

Now, under pressure from lawmakers in the state of Nuevo Leon, the Mexican Interior Ministry has opened an inquiry into the matter. Mexican law carries penalties for mocking state symbols such as the flag and one provision says that any action "that implies contempt or lack of respect to the Homeland Symbols will be punished according to its severity and the condition of the offender." The penalty for such an act can be up to approximately $1,200 dollars or 36 hours in jail.

"I felt truly offended and annoyed by the fact that a foreign artist feels like she can come here and make fun of and mock our national flag on Independence Day, September 16th. She brazenly made fun of our flag," state Rep. Francisco Treviño told CNN.

If the singer will actually be penalized is still unclear. She performed on Wednesday as well, and did not misuse any flags during the show. Her next performance on her Bangerz Ball tour is set for Friday in Mexico City. – Staff Writers