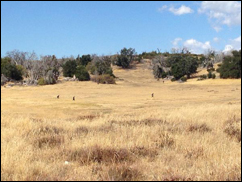 SAN DIEGO (CelebrityAccess) — Megadeth front man Dave Mustaine made a plea to the general public to help search for his missing mother in law who walked away from a campsite in South California on October 4th.

Mustaine's mother-in-law Sally Estabrook, 75, suffers from Alzheimer's disease and is largely uncommunicative. She was last seen near Pinezanita RV Park & Campgrounds in Julian, California. According to the San Diego Union-Tribune, her husband took a shower and when he returned, she had disappeared.

She is described as 5-foot-4, 145 pounds with blond hair and blue eyes and was wearing a teal-colored top and knee-length carpi pants at the time she went missing .

"We're just asking everybody that may have been up there to take a look in your sheds, in your garages, in the thick brush around your house," Mustaine said at a press conference Friday, according to a local NBC affiliate.

"A lot of times people that wander who have Alzheimer's are found very close to their homes. They just take shelter underneath bushes," Mustaine added.

Rescue workers from several agencies, as well as hundreds of volunteers have combed the area, including a 26-acre woodland around the campsite with no success.

"We're doing everything we can. We always hope for the best," San Diego County Sheriff's Sgt. Don Parker told the Daily News. "There's still hope, even though it's slim."- Staff Writers