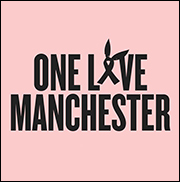 MANCHESTER, UK (CelebrityAccess) — In the face of a growing number of violent terror attacks in the UK in recent weeks, Ariana Grande's One Love Manchester concert was wall-to-wall people on Sunday.

The concert, at the Old Trafford Cricket Ground on Sunday evening, was attended by more than 50,000 people after selling out in just a few minutes. Hosted by Grande, the concert featuring performances by Coldplay, Oasis, Justin Bieber, Miley Cyrus, Katy Perry, Take That, Black Eyed Peas and others.

According to the New York Times, the mood at the concert seemed to be one of defiance amid tight security. The concert, itself a benefit to assist the victims of a terror attack two weeks ago at an Ariana Grande concert in Manchester, came just hours after seven civilians died in a separate terror incident in London.

Some fans expressed trepidation about attending the concert, but still, they came out to support the message.

“It puts you on edge a bit, but you can’t let those things affect you,” one attendee, 22-year-old Lily Gardner told the Times. “You can’t stop it from living your life, doing what you want to do.”

Grande's manager Scooter Braun thanked the audience from stage during the event and applauded their bravery in attending.

“Last night this nation was challenged, and all of you were challenged, and you had a decision to make if you were going to come out here tonight,” Braun told the crowd. “And this is so beautiful. You guys made that decision. You looked fear right in the face and you said, No, we are Manchester, and the world is watching.” – Staff Writers