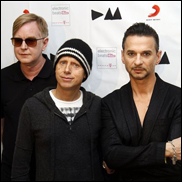 NEW YORK (VIP NEWS) — Depeche Mode leads this week's list of Hot Tours with more than $60.8 million in ticket sales from the Delta Machine Tour that supports its most recent album of the same name, which was released in March.


The Depeche tour kicked off in early May with European venues and an outdoor performance in Tel Aviv booked for the first three months on the road. The May and June dates are included in this week's tally – a total of 24 concerts that drew more than 788,000 fans in 16 countries. The European leg continues through the end of July, and the North American trek in amphitheaters and arenas begins on August 22 in Detroit. The band will also be part of the lineup at the Austin City Limits Music Festival in October.


Italian singer Vasco Rossi lands at No. 2 with $18.7 million in sales from multi-performance runs at stadiums in Torino and Bologna during his brief tour during June. Called Live Kom 013, the concert tour included four nights in Torino and three in Bologna with a combined total of 267,362 in attendance at both stadiums. Rossi played the same two venues along with six other stadiums two years ago during his Live Kom 011 outing that run during the summer months of 2011 in Italy.


Bruce Springsteen returns to the weekly lineup of Hot Tours, taking the No. 3 ranking with box office stats reported from four stadium performances on the Wrecking Ball Tour's final stint in Europe that wraps at the end of the month. Attendance at the June 29 concert at Stade de France in Paris was 61,867, the third highest attendance total among single show engagements since the tour began. The top attendance count was 70,425 at a packed Wembley Stadium in London on June 15, and second was a sold out event in the Netherlands on June 22 with 64,900 at Goffertpark in Nijmegen.


Rounding out the top 5 this week are Taylor Swift and P!nk with ticket sales reported from their concert tours on different continents. Swift's No. 4 ranking is based on $9.5 million in revenue from three Canadian markets on her Red Tour's North American trek. The overall gross from the tour now tops $58.5 million from 37 sold out concerts. P!nk's fifth place ranking comes from $7.2 million earned during the first stop on the Australian leg of her Truth About Love Tour. Perth was the first of five cities on her two and a half month stint Down Under that continues through early September. — according to Billboard