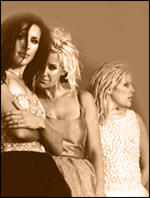 The Dixie Chicks had the biggest one-day sale in music history on March 1 with their "Lipton Presents Dixie Chicks Top of the World Tour" bringing in over $49 million in sales. With over 867,000 tickets sold, the Dixie Chicks surpassed Madonna, U2, Rolling Stones, Paul McCartney, Backstreet Boys, and N'SYNC. Tickets for 59 arena shows went on sale through Ticketmaster with 51 shows selling out; the remaining 8 shows have very few tickets left.

The North American leg of the tour kicks off on May 1 in Greenville, SC and will conclude on August 4 in Nashville, TN. The International leg of the tour will begin on September 6 in Stockholm.