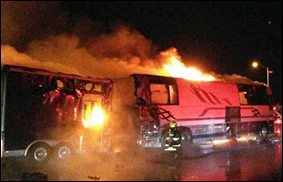 Topeka's KSNT News said the fire occurred at a Service Area on the Kansas Turnpike just outside of Topeka, Kansas early Wednesday morning. Driver Randel Moore was getting ready for bed when he heard the fire alarm.

“I turned the generator off and killed everything and the alarm was still going on. About that time the guy was banging on the door telling me to get out of the bus because the bus was on fire,” Moore told KSNT.

While none of the band was on the bus at the time, all of their lighting gear was in an attached trailer that was also destroyed in the blaze. As of yet, there is no word as to what caused the fire.

“All their personal guitars were on the other bus not this bus trailer, which is very good because the lighting can be fixed. It’s expensive but it’s not as devastating as losing all their guitars,” Moore told KSNT.

"We've lost more than a bus here. There are memories and possessions that we can't replace! It's really sad to see her go. We're just happy that our driver, Randy, is safe," a member of the group said in a post on their Instagram page.

The group's next gig is at the Shooting Star Casino in Mahnomen on Jan. 20th. – Staff Writers