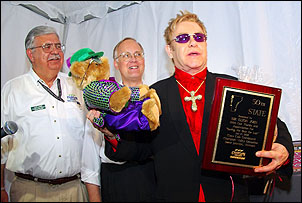 ESSEX JUNCTION, VT (CelebrityAccess MediaWire) — Its been almost 40 years since Elton John's first show in the US and he's still going strong. John has won numerous Grammys, an Academy Award, a Tony, a Kennedy Center Honor and a Knighthood from the Queen but one thing he hadn't done, was perform in all 50 of the United States.

Now, after Monday's show at Essex Junction in Vermont, where John performed for more than 2 1/2 hours to a sold-out crowd of 10,500 fans, he can scratch that off of his to-do list too.

"Elton John had been talking about wanting to play all 50 states and Vermont was one of the last. We're the largest venue in Vermont so they[Live Nation] came to us." Stephen Mease, the director for Public Relations at Essex Junction told CelebrityAccess.

It almost appeared as if the event wouldn't work out. It had rained all day the day before and Monday started our rainy as well, however by 4 o'clock, the weather cleared, leaving what Mease described as "Perfect" weather for a concert.

"I love America, I came here in 1970 for my first show in California, and it's taken me, well, 39 years to get to Vermont, but it's worth it and I love this country, and I wanted to play in every single state" John said during the concert. – CelebrityAccess Staff Writers