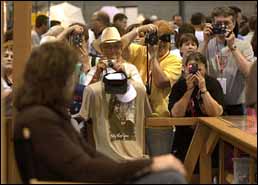 Fan Fair 2002 made the history books as the biggest in Fan Fair's 31-year history. Returning to downtown Nashville, June 13-16, with an attendance of more than 126,500, it was slightly ahead of last year's record-breaking mark.

"I'm happy to say it was a big success," said Ed Benson, executive director of CMA. "At a time when concert ticket sales are soft, we were able to hold the line and actually increase our attendance. More importantly, the improvements we made for Fan Fair 2002 were appreciated by the fans and the hundreds of artists who participated. Thanks to the breadth of activities, music and venues Fan Fair has evolved into an extraordinary, world-class musical event."

More than 40 artists participated in the star-studded nightly concerts at Adelphia Coliseum during the four days. The coliseum set up featured new state-of-the-art staging with improved sight lines and more seating. Even the traditional finale fireworks displays were bigger and better for 2002. Many of country music's hottest stars took to the Adelphia stage, including Trace Adkins, Brooks & Dunn, Kenny Chesney, Billy Ray Cyrus, Diamond Rio, Alan Jackson, George Jones, Toby Keith, Martina McBride, Jo Dee Messina, John Michael Montgomery, Rascal Flatts, Earl Scruggs, SHeDAISY, Cyndi Thomson, keith urban and Lee Ann Womack. One of the most popular elements of the nightly concerts at Fan Fair continued to be the photo line, where fans get close to the stage for shots of their favorite artists.

During the Sony Music show Friday, Tracy Lawrence and Joe Diffie joined Mark Chesnutt on stage for a preview of the upcoming "Rockin' Roadhouse Tour." The trio made several appearances throughout the week. Billy Ray Cyrus, star of PAX-TV's "Doc," closed the night with "Achy Breaky Heart" the signature hit he debuted at Fan Fair in 1992. The stars of "Days of Our Lives" and "Passions" took turns introducing each performance as they kicked off a weekend of Fan Fair appearances.

Bill Engvall hosted the WEA and EMI Show Saturday. Australian guitar slinger keith urban recognized Father's Day with a touching new song about his own father, "Song for Dad." Jo Dee Messina had a few surprises for the crowd, mixing hits like "I'm Alright" and "Bring on the Rain" with a medley that featured the Country classic "Stand By Your Man" and Aretha Franklin's "Think."

At the final concert on Sunday legendary banjo picker Earl Scruggs and his sons performed Scrugg's classic "Foggy Mountain Breakdown" and invited Dan Tyminski to join them for "I Am A Man of Constant Sorrow." A brief downpour didn't dampen enthusiasm for Lee Ann Womack, who performed "I Hope You Dance" with people dancing in the rain. The skies cleared as Toby Keith closed the show with a robust set of his hits that kept fans on their feet until the ending fireworks.

The Greased Lightning Riverfront Park Stages proved to be one of Fan Fair's favorite new venues, playing host to an array of artists from both major and independent labels, and showcasing a broad range of musical influences and styles from classic to alternative Country.

A total of 445 artists appeared in the air-conditioned Exhibit Hall at the Nashville Convention Center for the autograph and photo sessions Thursday through Sunday. Fan attendance in the Hall exceeded 46,000, up 21% from last year when the Hall was only open three days.

Lonestar turned the tables on fans at the Exhibit Hall having them do the autograph signing on a special wall in their booth. Billy Hoffman transformed his booth into an Old West Saloon, complete with barstools where his fans could sit and talk.

Bryan White invited his fans to fish in his booth, which was inspired by bait and tackle shops. At the Bush's Country Style Baked Beans booth, fans could get their photo with Jay Bush and his dog Duke and e-mail it to their family and friends.
For adults and children, there were free product samples and information from several Fan Fair partners including Domino's Pizza; Bush's Country Style Baked Beans; Kellogg's Cinnamon Crispix cereal; Greased Lightning Super Strength Cleaner; and Clarinex. The Coca-Cola Sega Interactive Game Truck was a hit with kids as were the inflatable rides; the Got Milk Soccer Shoot Out; the Mars Music Musical Petting Zoo (which featured a variety of instruments for kids to try); the Cracker Barrel tent with rocking chairs and checker board games; and the Food Lion-sponsored Book 'Em booth with reading projects for children.