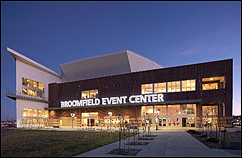 Felling ran the Coors Amphitheatre in Greenwood Village during the 1990s. Most recently he has been general manager of The Forum in Inglewood, Calif.

"This is a great state-of-the-art arena, and I am looking forward to our hosting a variety of concerts, family and sporting events. I'm also very excited to be working once again with my Denver promoter and media friends," Felling said in a statement.

Felling began his career at The Forum in 1975 and then, after six years, took on the challenge of building, opening and operating Pacific Amphitheater in Orange County, Calif. He also spent six years as general manager of Universal Amphitheater, now known as the Gibson Amphitheater.

"We could not be more excited to have an industry powerhouse such as Gene Felling join our team at the BEC," said Tim Wiens, president of Broomfield Sports and Entertainment. "His reputation for operating highly successful entertainment venues is nationally recognized. We look forward to having him start at the BEC very soon."

The Broomfield Event Center opened in November 2006 and is home to the Rocky Mountain Rage, a Central League hockey team, and the Colorado 14ers, an NBA developmental league basketball team. The event center is owned by the city and county of Broomfield and is managed by Broomfield Sports and Entertainment, LLC, a Wiens Group company.