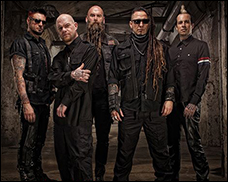 LAS VEGAS (CelebrityAccess) — Record label Prospect Park sued one of its artists this week, alleging breach of contract and claiming that the group started working on a new album and refused to provide masters to the label for a planned greatest hits collection.

According to Billboard, the band, which signed a four-album deal with Prospect Park in December 2012, also stands accused of “shamelessly attempting to cash in before the anticipated downfall of their addicted bandmate"; who was later identified as the band's frontman Ivan Moody.

The suit centers on the band's contract with Prospect Park, which stipulates that FFDP will not start working on a new album until at least 9 months have passed since the release of the preceding album, unless both the label and the group agree to do so in writing.

"The complaint was filed because the band unambiguously stated its intention to ignore its contractual obligations to Prospect Park, and in particular those that provided Prospect Park with creative involvement in the making of their next album. Those provisions are there for a reason and have existed in both contracts the band has signed with Prospect Park. Prospect Park has a history of cultivating successful artists that have gone Platinum and Multi-Platinum. This lawsuit is about making great music and the rights of both parties to have creative involvement in this process. The band, and its representatives, wanted to bypass that process for no other reason than short-term financial gain," a rep for Prospect Park told Billboard.

Following the lawsuit, FFDP released a statement addressing the legal entanglement, stating that they were "saddened, but not surprised by the recent lawsuit."

"It is the latest in a long line of exploitative and abusive bullying tactics used by our former manager and current label CEO Jeff Kwatinetz to extract money from and wield power against the band,' the group's rep said.

"Five Finger Death Punch is prepared to record and deliver the final album this year under its recording agreement, but instead of allowing us to record, Prospect Park has chosen to sue us, hold us for ransom and squeeze extra money out of its contract rights by attempting to sell an interest in future recordings. What's worse is that Prospect Park very deliberately filed their meritless lawsuit the same week we are trying put our Fall co-headlining arena tour on sale," the statement said. – Staff Writers